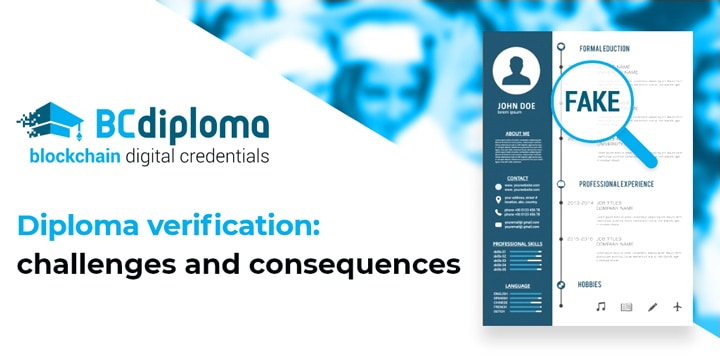 Facilitated by digital technologies, diploma fraud is an increasingly common practice. According to a 2018 study by the Florian Mantione Institute, 68% of applicant resumes were found to be misleading. In 29% of fraud cases, the applicant provided a different diploma than the one they held. Applicants diploma verification has become a key issue for companies to avoid making serious recruitment mistakes.

BCdiploma explains all about the challenges of diploma auditing.

What is diploma fraud?

Diploma fraud has many faces. It can include:

Diploma fraud has been around much longer than the Internet. Imitations appeared as early as the invention of diplomas issued by the first university, Bologna in Italy, in the 12th century. As for the “diploma mills”, they already existed at the end of the 17th century.

Today, with the rise of digital technologies, many websites offer fake diplomas at reduced prices and anyone can forge a diploma with software like Photoshop. “Free fake diploma” is a common request typed on search engines on average 600 times per month in France!

Lying on the resume is at an all-time high and has become normalized: according to the Florian Mantione Institute’s study, 85% of candidates say that fixing their resume is normal.

Given the extent of the situation, French legislation has implemented sanctions to discourage applicants from lying about their diplomas and to prosecute fraudsters.

Here is a history of the latest positions taken on these topics:

Risks and consequences of diploma fraud for the school, student and employer

Diploma fraud is a scourge with real consequences for the many stakeholders involved in a hiring process.

What are the consequences for universities, colleges and other schools?

Falsified diplomas can damage the reputation of the university or school in question, and even impact the entire education system. This discredits the real diplomas and degrees from the universities concerned in the hiring process. In addition, recruiters who are aware of diploma fraud must contact the training organizations in question or request official documents in order to ensure the authenticity of their former student’s diploma, which usually results in a very time-consuming administrative burden throughout the enrollment process.

What are the risks for the applicant?

Lying on a resume and falsifying a diploma is, by law, a criterion for the elimination of the applicant. In a Robert Half survey about lies on resumes, 47% of recruiters said they had already dismissed applicants whose resumes included lies. 53% of these lies were about diplomas!

If the lie has not been detected, once hired, the applicant faces the risk of lacking skills or knowledge related to the fake degree. In addition, if the lie is considered harmful to the company, the applicant who lied about their diploma faces dismissal for gross misconduct and legal action. As a reminder, forgery and use of forgeries are punishable by 3 years of imprisonment and a €45,000 fine!

What are the risks for recruiters?

Hiring applicants who have lied about their diploma is first and foremost a recruitment mistake that will most likely have an impact on the team’s productivity and the company’s performance, and therefore hurt its turnover. Furthermore, said applicant may be more likely to engage in other unethical practices in the future in their office environment. Finally, the reputation and credibility of the company are at stake.

But beware: the employer is at fault if the information on the resume is not verified and the lie is detected after hiring!

How do you set up diploma verification for an applicant?

Diplome.gouv.fr is an initiative of the Ministry of National Education launched in 2016. This digital credential verifies the authenticity of the 2.1 million state diplomas issued in 2017. It allows you to check the completion of secondary school diplomas as well as higher education diplomas with a university degree (GCSEs (brevet), baccalaureate (baccalauréat), vocational qualification (CAP), advanced technician’s certificate (BTS), etc.) using a control key (an identifier). The key can be carried over to the resume for easy verification. However, this service does not cover all years according to the academies nor all types of diplomas.

Checking resume information and education during the hiring process:

In its flash No. 58 of December 2019, the DGSI (General Directorate for Internal Security) recommends before the interview to make recruiters aware of the risk of fraud and to pay particular attention to the consistency and accuracy of the elements indicated on the resume. During the interview, the recruiter can request permission to contact the high school or university’s registrar and/or request copies of the former student’s diploma, degree or academic transcript prior to enrollment. An interview based on a detailed presentation of the applicant’s background, skills and technical knowledge should also contribute to verifying the authenticity of their resume, academic records and transcripts.

While diplome.gouv.fr can only identify certain diplomas such as the baccalaureate (baccalauréat, high school diploma) and the advanced technician’s certificate (BTS), other schools are taking steps to avoid fraud and are using the blockchain to digitally certify their students’ diplomas! With BCdiploma and its blockchain, schools such as emlyon business school, the University of Lille, and Arts et Métiers Paristech are setting up a digital micro credential system for their diplomas: the student can send recruiters an email with a secure link that will allow them to access an official, tamper-proof online certificate in a single click.

BCdiploma offers universities and high schools the ability to secure students’ diplomas using blockchain for education and open badge to make them easily accessible to recruiters. With a secure URL link to a tamper-proof and verifiable diploma certificate, the student can share their certificate on their resume or LinkedIn indefinitely.

How prevalent is diploma fraud?

Diploma fraud has been around as long as diplomas themselves. But it has reached an all-time high with the rise of digital technologies, with fake certificates, high school degrees and more available for purchase and forgery through Photoshop.

What are the consequences of diploma fraud?

Diploma, certificate or transcript falsification can damage the university, college or high school reputation, and lead to recruitment mistakes for businesses. An applicant who lied about their qualification may hurt to company’s performances, and might be more likely to engage in other morally reprehensible actions down the line in their office environment.

How to improve diploma verification?

Prior to enrollment, businesses must run the necessary verifications on their applicants’ diploma and qualifications through nationwide government resources. However, some schools, universities, colleges and training organizations are going even further to address this issue by using blockchain technology to create a digital verification system for any diploma and academic transcript they issue to their students.

What does digital diploma verification entail?

Digital diplomas provide employers and academic institutions with an easy, free and reliable way to authenticate applicant credentials and check their academic records. They can independently verify the diploma’s issuer and date of issuance, and the fact that degree was indeed delivered to a specific individual, and not someone else. Students can opt in to receive a digital diploma via email, and they can then share it with whomever they choose.